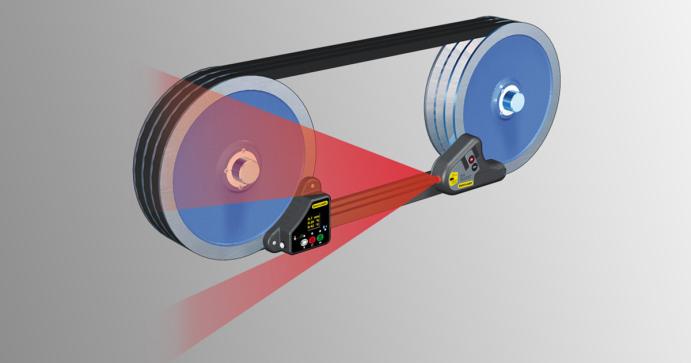 Why laser tools are better for belt alignment

Do you still use straight edge or string to align your belt transmissions? There is a better and easier method available, which quickly pays for itself.

It is a common misconception that it doesn’t matter whether you align your sheave/pulleys or not. That is probably why aligning pulleys using a straight edge is still common. But belts also have tolerances to meet. Using old alignment methods then, just won’t do.

Most laser-based belt alignment tools are based on a “laser plane” that is parallel with one pulley and that constitutes the reference with which the other pulley is aligned. In fact, you could say that the laser beam is an absolutely straight, weightless ruler in two dimensions at the same time!

Some belt manufacturers still challenge their customers to use a ruler when aligning. This is despite the fact that there has long been a simpler solution, namely using a laser. Using the Easy-Laser D90 BTA and its integrated magnets, it is easy to secure the laser transmitter to the side of the pulley and visually check the alignment of the targets, which are located on the other pulley. You are not restricted by the length or weight of a ruler or steel rule. It is possible to discern approximately 0.5 mm (20 mils) with the naked eye, and this is often sufficiently accurate and satisfies the specifications for the machine. But it is absolutely not optimal!

Most modern pulleys are machined, which is why securing to the side is not a problem. The side of the pulley will also never be worn by the belt, which can happen with the belt groove. The side mounting also makes it possible to align pulleys that do not have a groove, such as toothed belts, flat belts and chain drives, using the same laser tool. And the Easy-Laser D90 is so light and handy that it can also be secured to a non-magnetic surface with double-sided tape.

A side-mounted laser tool can also be used to align pulleys without a belt groove.

Another advantage of laser tools is that you can easily see any misalignment of the pulleys both horizontally and vertically at the same time. Using a ruler to check the vertical parallelism of two pulleys is very time-consuming. (The sheave/pulley can naturally also be installed with the pulleys horizontal, yet the procedure for alignment is still the same.) In fact, because alignment is so much quicker with a laser tool, you will have less downtime. This in itself is a reason for using it.

To make things even easier and more accurate, you should use the Easy-Laser XT190 BTA. The alignment is presented digitally “live” on a detector/display unit. The XT190 can also be used together with a display unit that is included in an Easy-Laser shaft alignment system. The measurement results are then shown in this display unit as in the separate detector, although the shim values are also calculated. As this is a wireless system and all the values are shown “live”, you can take the display unit with you to the adjustment point on the machine. This makes your work much easier! The results of the alignment can also be documented in the form of a report, which would not be the case if you had used an analogue tool. 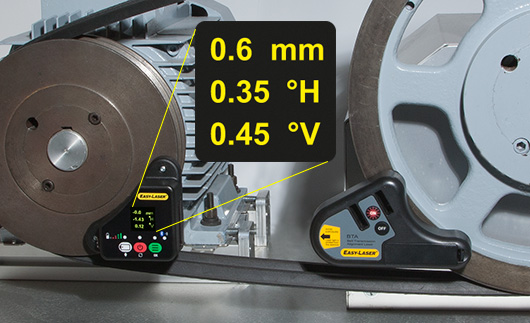 Using a digital tool you can align to the belt manufacturer’s tolerance, and you can also document the result. Offset in mm or inches, horizontal and vertical angle “live” at the same time.

What are the main benefits of using lasers?

Here are some examples of how much you can save, having your belt drives correctly aligned

Read part 1 in this series: Do you have hidden opportunities to make savings?