Unplanned downtime in the pulp and paper industry is very costly, therefore properly aligned machines are of the utmost importance. With Easy-Laser, you can check and adjust roll parallelism, align the rotating machines and measure flatness.

Planned operational stoppages need to be kept as short as possible, which demands that the measurement system is easy to use. With Easy-Laser® E970 Parallelism measurement system you can measure and adjust the rolls to the correct position, parallel and level. The most common procedure is to place the laser transmitter on a tripod to the side of the machine (see image). It is then adjusted to point along the machine, i.e. at right angles to the rolls.

The next step is to use the laser transmitter's built-in 90° angular prism to point the beam in parallel with a selected roll. The software guides you through the procedure step-by-step. The detector is placed at both ends of the roll, and you now get an angle value relative to the machine. This can now be a reference. Now we point the beam along the machine again, on an angular prism placed next to the other rolls to be checked. As before, we measure at both ends of the roll. The new measurement values we get show how the rolls should be adjusted to be parallel to each other. The adjustment is made with "live values" for immediate feedback.

The pitch is checked with a digital precision level (for example Easy-Laser® XT290), or by levelling laser D22 according to the built-in vials and pointing the beam above the roll. The detector is then placed vertically at the ends of the roll, and the measurement values are recorded at each position. Because the laser beam is levelled, the measurement result gives the position of the roll in relation to this. Adjust if necessary. 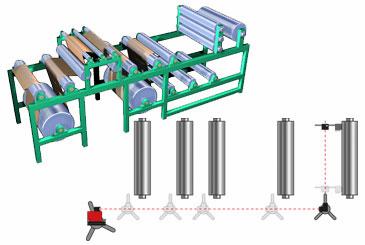 Everything that is needed to check flatness of wire ends is included in the E970 Parallelism system. In fact, with this system you can make most types of geometric measurements; straightness, flatness, squareness, parallelism, level. You can therefore check and adjust all sections of the paper machine, not just rolls, to ensure reliability and product quality with the same system.

To align the drive units for the rolls, for example gearbox and cardan shaft, shaft alignment systems are used. These are also used for all other rotating machines in the installation, such as pumps and motors. Read more about shaft alignment.

Aligned with Easy-Laser® XT190 BTA, the world's only sheave/pulley tool with digital display of real-time adjustment. This enables alignment according to the tolerance requirements of the belt/pulley manufacturer.

This is another type of machine that is similar to a paper machine, and has many similar needs for alignment, such as roll parallelism.

Overhead tracks must be installed in parallel and level, and also checked for straightness. This can be done with the E970 Parallelism alternatively the E920 Geometric systems for example.